A young banker decided to get his first tailor-made suit. So he went to the best tailor in town and got measured for a suit.

A week later he went in for his first fitting. He put on the suit and he looked fabulous. He felt he could do business in this suit.

As he was preening himself in front of the mirror he bent down to put his hands in the pockets and, to his surprise, noticed that there were no pockets.

He told the tailor about it, who asked him, “Didn’t you tell me you were a banker?”

The tailor said, “Whoever heard of a banker with his hands in his own pockets?”

The Best Salesman Ever 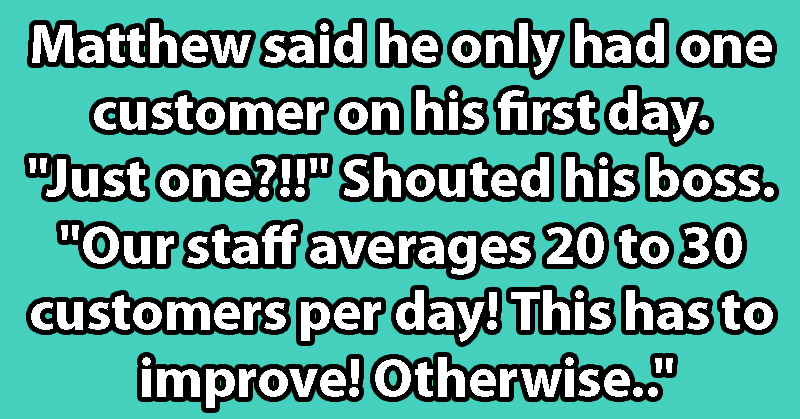 Matthew, a young man from a small town in North Dakota, moves to Miami. He walks into a large department store and tries to find a job.

Finally, he gets an interview with the boss who asks him:

“Do you have any sales experience?”

“Yes. I was a vacuum cleaner salesman in North Dakota,” the young man answered.

The boss was unsure, but he liked Matthew – so he gave him a chance.

Matthew’s first day on the job was tough, but he succeeded. After the store closed, the boss entered the sales area and gathered all the staff.

READ
Can You Find The Missing Number? Most People Can't Do It In Less Than 10s

“How many customers did you have today Matthew?”, asked the boss.

The boss, after hearing that, shouted:

“Just one ?! Each sales staff in this store has an average of 20-30 customers per day. This has to improve! And soon! If you want to continue working here. Our sales standards are very strict over here. One sale a day might have been acceptable in North Dakota, but you’re not in the countryside anymore, son. Get it together, or get out!”

The young man listened to the manager’s complaint but continued to stare at the floor. Feeling bad for chewing him out on the first day, so the boss asked:

“Okay, how much was your one sale for?”

Matthew looked up and answered:

The boss shouted in amazement:

“First I sold him a few new fish hooks. Then I got him a new fishing rod to go with his new hooks. While I was talking to him about the rod, I asked where he was planning to go fishing, and he said down the coast, so I told him he would need a boat, so we went down to see the boat section and I sold him the new twin-engine model we have on display. The man said he didn’t think his car could actually pull the new boat, so I took him to our car department and sold him the latest 4×4 Dodge truck model.”

The boss’ jaw hit the floor, and after a minute of silence he asked:

READ
A Blond, a Brunette, and a Redhead

“So this guy came over to buy fish hooks — and you sold him a boat and a new truck?!

The following day, the boss gave Matthew a promotion…

What a comeback! I was laughing so hard I couldn’t keep my coffee inside.

“The guy actually came in looking for t-a.m.p.o.n.s for his girlfriend. But then I told to him, “Man, your weekend’s busted, might as well go fishing’.

The next day, the boss gave Matthew a promotion…

What a return! I laughed so hard I couldn’t leave my coffee inside. Hope this joke makes you smile! Can You Find The Odd One In Two Minutes?

Man walks into a shop and sees a very cute dog.