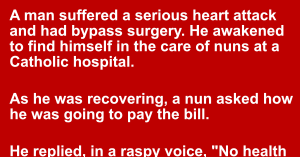 A man suffered a serious heart attack and had bypass surgery. He awakened to find himself in the care of nuns at a Catholic hospital.

As he was recovering, a nun asked how he was going to pay the bill.

He replied, in a raspy voice, “No health insurance.”

The nun asked if he had money in the bank.

He replied, “No money in the bank.”

The nun asked, “Do you have a relative who could help you?” He said, “Just a spinster sister, who is a nun.”
The nun, slightly perturbed, said, “Nuns are not spinsters! Nuns are married to God.”

The patient replied, “Then send the bill to my brother-in-law.” 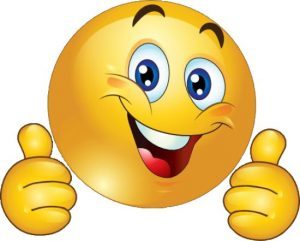 A prince was put under a spell

A prince was put under a spell so that he could speak only one word each year. If he didn’t speak for two years, the following year he could speak two words and so on.

One day, he fell in love with a beautiful lady. He refrained from speaking for two whole years so he could call her “my darling.” 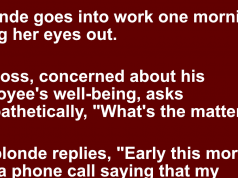 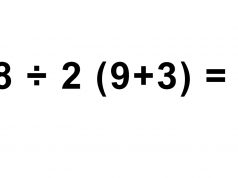 Only A Few People Can Solve This: Are You Smart Enough...

Visual Perception Test: How Long Does It Take For You To...

Very Few People Get This Right: How Many Pens Do You...