A strong young man at a construction site was bragging that he could out do anyone in a feat of strength.

‘Why don’t you put your money where your mouth is,’ he said. ‘I will bet a week’s wages that I can haul something in a wheelbarrow over to that building that you won’t be able to wheel back.’

The old man reached out, grabbed the wheelbarrow by the handles, and said, ‘All right, young man, get in.’ 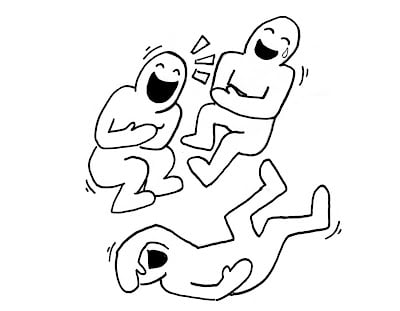 A retired older couple return to a Mercedes dealership

where the salesman has just sold the car they were interested in to a beautiful, leggy, busty blonde in a mini skirt and a halter top.

The old man was visibly upset. He spoke to the salesman sharply.

“Young man, I thought you said you would hold that car till we raised the $55,000 asking price,” said the older man.

“And if I remember right, you had insisted there was no way you could discount this model.”

The salesman took a deep breath, cleared his throat and reached for a large glass of water.

“Well, what can I tell you? She had the cash ready, didn’t need any financing help, and, Sir, just look at her, how could I resist?”, replied the grinning salesman sheepishly.

Just then the young woman approached the senior couple and gave the car keys to the old man.

“There you go, dad” she said. “I told you I could get that idiot to lower the price.”.

Why Do I Have to Stay There? 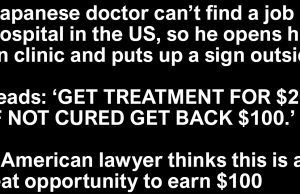 A Japanese Doctor Opening a Clinic