An elderly couple who had just celebrated their fiftieth anniversary were sitting on their porch, relaxing.

Both were simply reading a book and rocking on their chairs. When suddenly, the wife looks at her husband and whacks him across the head, and goes back to her knitting.

Her husband, puzzled, asks, “What was that for?”

He goes back to his newspaper, but a few minutes later, he looks at his wife and whacks her across the head.

The wife, also puzzled asks him, “What was that for?”

Not looking up from his newspaper, the husband answers,

“That is for knowing the difference.”

Shortly before our 25th wedding anniversary, my husband sent 25 long-stemmed yellow roses to me at my office.

A few days later, I plucked all the petals and dried them.

On the night of our anniversary, I spread the petals over the bed and lay on top of them, wearing only a negligee.

As I’d hoped, I got a reaction from my husband.

When he saw me, he shouted: “Are those potato chips?” A blonde and a redhead playing betting 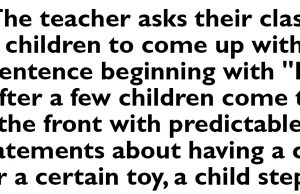 Teacher asks their class of children to come up with a...