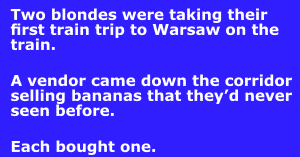 Two blondes were taking their first train trip to Warsaw on the train.

A vendor came down the corridor selling bananas that they’d never seen before.

The first one eagerly peeled the banana and bit into it just as the train went into a tunnel.

When the train emerged from the tunnel, she looked across to her friend and said, “I wouldn’t eat that if I were you.”

“I took one bite and went blind for half a minute.”

LoLLL, did you laugh? We hope you enjoy this joke, have a nice day!

A man dials the pantry and shouts into the phone 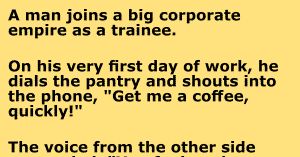 A man joins a big corporate empire as a trainee. On his very first day of work, he dials the pantry and shouts into the phone, “Get me a coffee, quickly!”

The voice from the other side responded, “You fool you’ve dialed the wrong extension! Do you know who you’re talking to, dumbo?”

“No,” replied the trainee.

“It’s the CEO of the company, you fool!”

The trainee shouts back, “And do you know who YOU are talking to, you fool?!”

“No,” replied the CEO indignantly.

“Good!” replied the trainee, and puts down the phone. 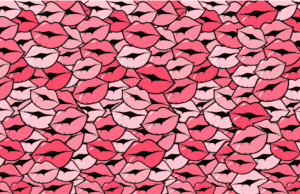 Spot the Hidden Lipstick in under 15 seconds! Can you? 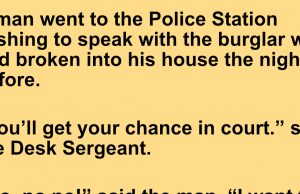 A man went to the Police Station wishing to speak with...