A new general was allotted to a new army base.

After some time in the base he realized how there were two army men guarding an empty bench in shifts. He asked his colleagues and his juniors what it was all about.

A colleague said “I don’t know but it’s been a tradition here since joined 35 years ago.”

The general confused as he was went through the past generals of that base till he found the one that was in charge 35 years ago.

He attempted to find him, and found that he had retired and he lived in the countryside now. He contacted him and requested to meet.

On the day of the meeting the general asked the retired commander why that bench was guarded so much. The commander was shocked.

“So you’re telling me the paint on that bench hasn’t dried yet?!”

Little Johnny sees his daddy’s car passing the playground and going into the woods.

Curious, he follows the car, and sees daddy and aunt Jane sharing a ‘passionate moment’.

Johnny finds this so exciting and can barely contain himself as he runs home and starts to tell his mother excitedly.

“Mommy, Mommy, I was at the playground, and daddy and….”

Mommy tells him to slow down, but that she wants to hear the story. So Johnny tells her.

“I was at the playground and I saw daddy’s car go into the woods with aunt Jane. I went to look and daddy was giving aunt Jane a big kiss, then he helped her take off her shirt, then aunt Jane helped daddy take his pants off, then aunt Jane laid down on the seat, then daddy…”

At this point, mommy cut him off and said: “Johnny, this is such an interesting story, suppose you save the rest of it for when we’re having dinner. I want to see the look on daddy’s face when you tell it tonight.”

At the dinner table, mommy asks Johnny to tell his story.

“Well, I was at the playground, and I saw daddy’s car go into the woods with aunt Jane. I followed them to see what they were doing, and then I saw how daddy gave aunt Jane a big kiss, and then he helped her take off her shirt. Then aunt Jane helped daddy take off his pants, and then daddy and aunt Jane did that same thing mommy and uncle Jack used to do when daddy was in the Army.”

Sometimes you might want to listen to the full story before you interrupt. 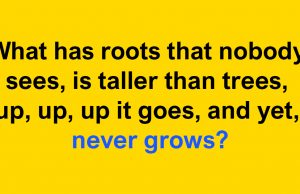 Only a few people can handle this tricky riddle – did... Only a few people see all the animals in this picture...