A police officer responded to a report of a disturbance at a downtown restaurant.

The “disturbance” turned out to be well over six feet tall and weighed almost 300 pounds.

The giant boasted that he could whip the officer and the Heavyweight Boxing Champion of the World.

“I bet that you’re also an escape artist, probably better than Houdini,” said the policeman.

“If I had some chains,” the officer continued, “you could show us how strong you really are. But all I’ve got is a set of handcuffs. Why don’t we see just how quickly you can break out of them?”

Once in the cuffs, the man puffed, pulled and jerked for four minutes.

“I can’t get out of these,” the giant growled.

“Are you sure?” the officer asked.

“In that case,” said the officer, “you’re under arrest.”

Five Scotsmen in an Audi Quattro arrived at an Irish border checkpoint.

Paddy the officer stops them and tells them: “It is illegal to put 5 people in a Quattro, Quattro means four.”

“Quattro is just the name of the automobile,” the Scotsmen retort in disbelief. “Look at the papers: this car is designed to carry five persons.”

“You cannot pull that one on me,” replies Paddy. “Quattro means four. You have five people in your car and you are therefore breaking the law.”

The Scotsmen reply angrily, “You idiot! Call your supervisor over. I want to speak to someone with more intelligence!”

READ
Can You Find a Carrot in This Picture?

“Sorry,” responds Paddy, “Murphy is busy with 2 guys in a Fiat Uno.” 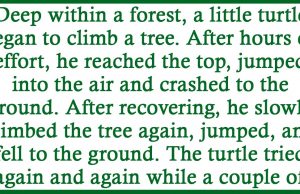