A customer at Green’s Gourmet Grocery marvels at the proprietor’s quick wit and intelligence.

“Tell me, Green, what makes you so smart?”

“I wouldn’t share my secret with just anyone,” Green replies, lowering his voice so the other shoppers won’t hear. “But since you’re a good and faithful customer, I’ll let you in on it. Fish heads. You eat enough of them, you’ll be positively brilliant.”

“You sell them here?” the customer asks.

The customer buys three. A week later, he’s back in the store complaining that the fish heads were disgusting and he isn’t any smarter.

A man decides he wants to fish.

Unfortunately, his favorite spot became illegal to fish in.

Undeterred, he fishes for 2 hours, and at this point, he already has a bucket full of fish and he’s still fishing.

Out of nowhere a cop comes in and tells him: “You know you can’t fish here, right? It’s illegal, I’m gonna have to arrest you.”

The man hides the pole and replies: “Oh no no those are my pet fish. I just come here every week or so drop them in the pond, and once they are done swimming they jump back in and I go home.”

At this point the officer smirks, he knows he’s lying, so he says: “Well then show me, if you can truly show me that they will do that then I’ll let you go.”

The man agrees and dumps the fish into the pond.

“So when are the fish jumping back in the bucket?” Asks the officer smugly. 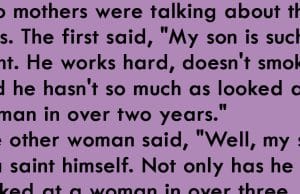 Two mothers were talking about their sons. Can You Find The Odd Pirate?