A Russian, an American, and a British admiral were having a drink on an American aircraft carrier. They were talking about the bravery of their sailors.

The Russian said, “I will demonstrate the courage of our sailors.”

He calls a sailor and says, “Jump off the ship. Swim under it and climb back up.”

The sailor salutes and immediately jumps off the flight deck, swims under the ship, climbs up the davits, and stands in front of the admiral, and salutes him.

The Russian said, “That, gentlemen, is courage.”

The American says, “That’s nothing.”

He calls over a PO and says, “I want you to jump off the bow. Swim under the ship to the stern, then come back. ”

The PO salutes, jumps off the bow, swims to the stern, and climbs back up to stand in front of the admiral and salutes.

The American says, “That, gentlemen, is courage.”

The sailor comes to attention and salutes.

The admiral says, “I want you to climb the highest mast on the carrier, jump off, swim from bow to stern, and then from beam to beam then climb up the mast and do it again.”

The sailor looks at the admiral and says, “No way, sir!”

The admiral turns to the other two and says, “And that, gentlemen, is courage.”

A wife go to bar with her husband. 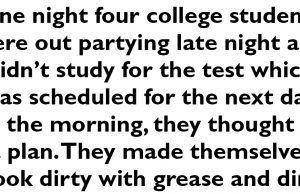