READ
A Blonde Lost In A Snowstorm 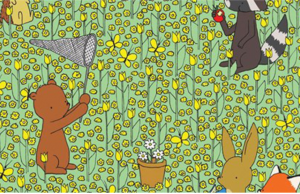 Can You Find A BEE Among The Flowers?