An American man walks into an Irish pub.

People raise their heads but ignore the absurd bet and go back to drinking and having fun, except for an Irishman who leaves the bar.

Some time passes and the Irishman returns to the pub and approaches the American. “Is yer bet still on the table?”

The American man replies, “Sure it is! Bartender, get this man his drinks.”

The bartender lines up 10 pints of Guinness on the bar.

The American starts drinking and drinks all the Guinness in less than 5 minutes.

Astonished, the American man hands over the money and asks, “Well, can I ask you where you went earlier? Did you go to prepare in some ancient Irish way?”

“No. I went to the pub next door first to see if I could do it.” Two Irish men were seated next to each other at Murphy’s Pub in London.

After a while, one guy looks at the other and says: “I can’t help but think when listening to you that you are from Ireland.”

The other guy answers proudly: Yes, that I am!’

The first one says: “Me too! And where about from Ireland might you be?”

The other guy replies: “I’m from Dublin, I am.”

The first one responds: “So am I!” Mother Mary and Begorrah. And what street did you live in Dublin?

The other guy says: “A lovely little area it was. I lived on McCleary Street in the old central part of town.”

The first one says: “Faith and it’s a small world. So did I! So did I! And to what school would you have been going?”

The other guy answers: “Well, I went to St. Marys, of course.”

The first one is very excited and says: “And so did I. Tell me, what year did you graduate?”

The first one shouts: “The Good Lord must be smiling down upon us! I can hardly believe our good luck at winding up in the same place tonight. Can you believe it, I graduated from St. Marys in 1964 my own self.”

About this time, Vicky walks up to the bar, sits down, and orders a drink.

Brian, the bartender, shakes his head and walks over to Vicky, and mutters. It’s gonna be a long night tonight.

Vicky asks, Why are you saying that, Brian?

The Murphy twins are drunk again.

No one in your family can find the mistake in this... 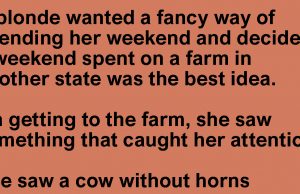 A Blonde Visits a Farm