The husband challenges the other man to an old fashioned duel with his hand g.u.n.s, whoever manages to shoot first and k*ll the other gets his wife.

The other man agrees, so they go into another room so the wife doesn’t have to see it.

Once in the other room, the husband turns to the other man and says:

“Why should either of us have to die? We will both fire a shot into the air and lay on the ground as if we’re dead, when she comes in she will see our ‘lifeless’ bodies and rush to one of us, whoever she chooses can have her.”

The other man agrees again, so they fire into the air and collapse.

The wife throws the door open and peers down at the two men, then backs out of the room and calls out:

“Darling, you can come out! They’re both dead!”

Once Dean and Martin came to Martin’s house and heard some noises in Martin’s bedroom upstairs.

Surprised and alert, they crept up and peeked inside the bedroom carefully from the gap in the door.

They found his milkman in bed with Martin’s wife.

They went down silently and into the kitchen.

Martin was shaking with rage.

He jerked open the fridge, grabbed two bottles of chilled beer and handed one over to Dean.

Both had a couple of sips in silence.

Dean understood Martin’s rage and said: “Sorry about that, but what about that milkman?”

Martin: “What about him? He can get his own damn beer.” 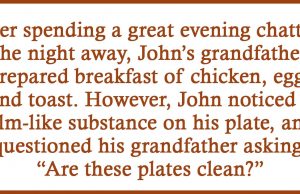