One day a college professor of Psychology was greeting his new college class.

He stood up in front of the class and said, “Would everyone who thinks he or she is stupid please stand up?”

After a minute or so of silence, a young man stood up.

“Well, good morning. So, you actually think you’re a moron?” the professor asked.

The kid replied, “No sir, I just didn’t want to see you standing there all by yourself.”

Two Eskimos sitting, paddling along in a kayak,

when one felt a little chilly so he made a little pile of sticks and lit a fire in the craft.

His friend shouted at him to put it out, but the warning was ignored.

Unsurprisingly, the kayak sank quite quickly and finding themselves in the cold water, the second Eskimo whacked his idiot mate over the head with a now redundant paddle.

“Ouch!!” said the previously warm Eskimo, “what did you do that for?!?”

“Because, you idiot,” said the second Eskimo, “Don’t you know that you can’t have your kayak and heat it too??”

Can You Solve This Correctly?

A funny joke about a taxi driver and pastor that went... 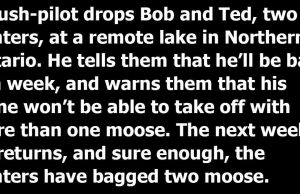