The wife sent her husband a Jewish Bra

Sam goes into Macy’s, to the lingerie department, and he says to the salesgirl, “My wife has sent me in for a Jewish bra, size 34B, and she said that you’d know what I meant.” 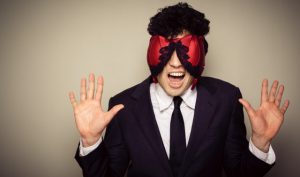 The saleslady says, “Boy, it’s been a long time since anybody’s asked me for a Jewish bra. They usually ask me for a Catholic bra or a Salvation Army bra or a Presbyterian bra.”

He says, “Well, what’s the difference?”

“Well,” she explains, “the Catholic bra supports the masses, the Salvation Army bra uplifts the downfallen, and the Presbyterian bra keeps them staunch and upright.”

“Oh, a Jewish bra makes mountains out of molehills.”

The instructor said, “I’ll radio you every 1000 feet to see how you’re doing.” At 1000 feet, the instructor radioed her and said she was doing great.

Right before she got to 3000 feet, the propeller stopped, and she twirled to the ground. The instructor ran to where she crash-landed and pulled her out of the helicopter. “What went wrong?” The blonde said, “At 2500 feet, I started to get cold, so I turned the big fan off.”

A Man Asks Hotel If He Could Bring His Dog

Smart older lady calls a hospital to check on a patient.

These FIND THE ODD ONE OUT Puzzles Will Test Your Agility

[Picture Puzzle] You Have Just 10 Seconds To Find The Difference!

What Is Full Of Holes But Can Still Hold Water?