Wake Up Your Mind
Home Blog Two guys are riding on a train through Texas.
Share
Tweet 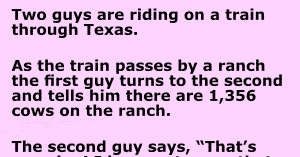 Two guys are riding on a train through Texas.

As the train passes by a ranch the first guy turns to the second and tells him there are 1,356 cows on the ranch.

The second guy says, “That’s amazing! I happen to own that ranch and I know for a fact that I have 1,356 head of cattle. How did you ever figure out the number of cows from a speeding train?”

“Oh it’s simple” the first guy replies. “I counted the legs and divided by four.”

LoLLL, can you guess the first guy’s hair color? 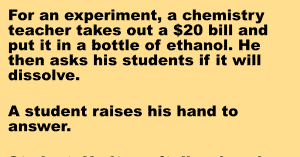 For an experiment, a chemistry teacher takes out a $20 bill and put it in a bottle of ethanol. He then asks his students if it will dissolve.

A student raises his hand to answer.

Student: No it won’t dissolve sir.

Teacher: Really good! Now can you explain to the rest of the class why?

Student: You’re so cheap, there’s no way you would’ve sacrificed that $20.

LoLLLLL, did you laugh? we hope you like this joke! have a nice day! A man walks past a beggar every day and gives him... 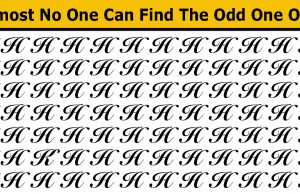