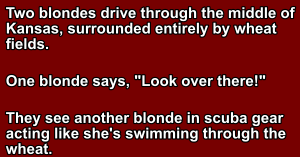 Two blondes drive through the middle of Kansas, surrounded entirely by wheat fields.

One blonde says, “Look over there!”

They see another blonde in scuba gear acting like she’s swimming through the wheat.

The blonde driving says, “It’s girls like that who give us blondes a bad name.”

The other blonde says, “Yeah! And if I knew how to swim, I’d go out there and tell her off.”

A blonde, a redhead, and a brunette rob a bank