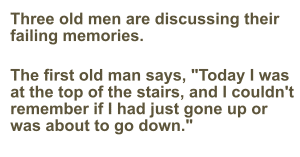 The first old man says, “Today I was at the top of the stairs, and I couldn’t remember if I had just gone up or was about to go down.”

The second old man says, “I was sitting at the edge of my bed and I couldn’t remember if I was about to sleep or just woke up.”

The third man scoffs and says, “My memory is as good as ever, knock on wood.” With this, he hits the table twice with his knuckle, looks up in surprise, and yells “Who’s there?”

Is Your Vision Good Enough To Spot All 4 Odd Ones?

Can You Find Out What’s Wrong With This Picture?