There was this nouveau riche blonde girl,

who went to the nearest Mercedes showroom with a pocketful of dollars, and came out with the latest model.

Half an hour later, she was back at the showroom, claiming that the car they sold her was terrible, that she was disappointed a brand-new Mercedes would get a fault in the gearbox after 15 minutes.

The management apologised and gave her a new car.

Again, after half an hour she came back.

The management offered her a new car, but sent along one of their engineers to see if they could figure out what the problem was. 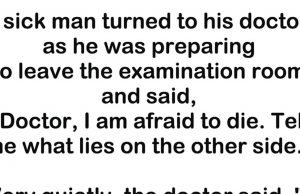 A Sick Patient Asks His Doctor, “What Is Heaven Like?”