These two guys are sat in their hospital beds having a little chat.

The first guy asks the second, “What are you in for?”

“Camera down the throat.” the second guy replies.

The second guy says, “Yeah. Checking for stomach cancer. How about you?”

“Camera up the butt.” the first guy says.

The first guy says, “No, my neighbor was sunbathing and my wife caught me taking a photo.” A man goes into a bar in the airport and asks... 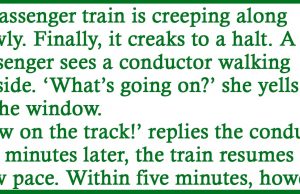