A man loses his thesaurus, which he uses all the time.

He searches all over his house for it. He’s double-checked everywhere, but he just can’t find it. Fed up with searching, he decides to ask his family members.

His daughter loves reading books, so he decided to ask her first. Man: “Did you take my thesaurus?”

Daughter: “I didn’t take your thesaurus, I was just reading my favorite book. Maybe ask my brother? He always tries to reach into high cabinets, so he might have taken it to stand on.”

So the man goes off and to look for his son. He finds his son sitting on the couch, playing video games. Man: “Did you take my thesaurus?”

Son: “Of course not, I hate reading. Ask mom, she might have it.”

So the man looks for his wife, but she isn’t home. He starts getting really frustrated. He goes to the stables to search for her. He goes in but there’s just their horse standing there.

The man, frustrated, decides to amuse himself. “I don’t suppose YOU know where my thesaurus is, right?”

READ
Reminded of Her Youth. 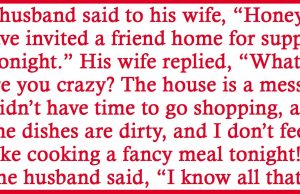