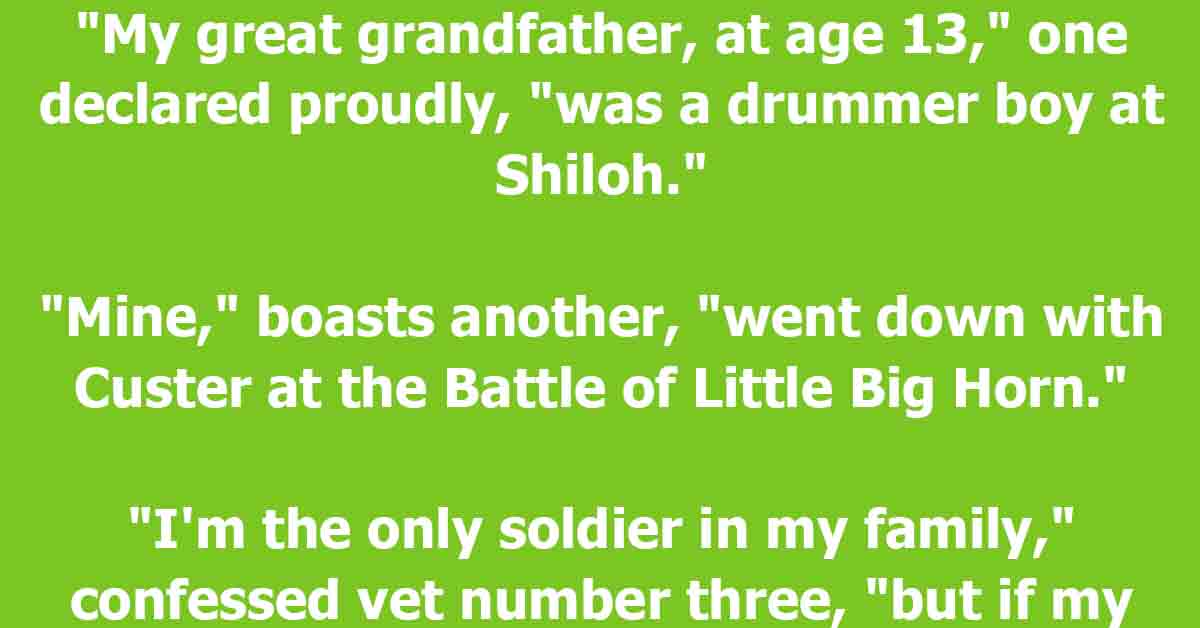 A trio of old veterans were bragging and jokes

about the heroic exploits of their ancestors one afternoon down at the VFW hall.

“My great grandfather, at age 13,” one declared proudly, “was a drummer boy at Shiloh.”

“Mine,” boasts another, “went down with Custer at the Battle of Little Big Horn.”

“I’m the only soldier in my family,” confessed vet number three, “but if my great grandfather was living today he’d be the most famous man in the world.”

“Really? What’d he do?” his friends wanted to know.

Three men sat around a table in a bar and talked about their wives.

The first man says, “I think my wife is having an affair with an electrician. When I got home last night I found a pair of pliers and some insulating tape behind the radiator in the bedroom – we’ve not had any work done on the house, and I can’t think of any other way they could have got there”.

The second man says, “I think my wife is having an affair with a carpenter. Last night I found a tool belt in the laundry basket, and we’ve not had any renovations to the house in years…”

The third man says, “I’m in the same boat, but I don’t think you two have it as bad as I do… My wife is having an affair with… (stops for dramatic effect) a horse!”

The two other man both look at him with a confused look and demand an explanation. Has he gone insane?! Has she?! What the heck was he talking about?

The third man lies back and says: “It’s very simple, boys, when I got home last night, I found a jockey hidden in the wardrobe.”

A drunken man walks into a coffee shop one day

A Lady Walks Into a Jewelry Store