A man walks into a barber shop and says, “I’ll have a shave and a shoe shine.”

The barber lathers his face and sharpens the straight edge while a gorgeous woman kneels down and shines his shoes.

The man says, “Hi there. You know, you and I should spend some time in a hotel room.”

The man says, “Tell him you’re working overtime, and I’ll pay you the difference.”

She says, “You tell him. He’s the one shaving you.”

A guy sticks his head into a barbershop and asks

“Hey, Buddy! how long before I can get a haircut?”

The barber looks around the shop and says “about 2 hours,” and the guy leaves.

A few days later the same guy sticks his head in the door and asks…“how long before I can get a haircut?”

Again, the barber looks around at a shop full of customers and says “about 2 hours.” The guy leaves.

A week later the same guy sticks his head in the shop and asks “how long before I can get a haircut?”

The barber looks around the shop and says “about an hour and a half”. The guy leaves.

The barber looks over at a friend in the shop and says “Hey, Joey, I’ll give you a free cut if you follow that guy and see where he goes.”

In a little while, Joey comes back into the shop laughing hysterically. The barber says, “this must be good, where did he go when he left here?” A husband and wife were golfing when suddenly the wife asked 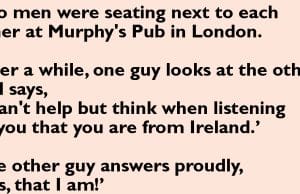