There was a young fellow who was quite inventive and was always trying out new things.

One day he thought he’d see just how fast a bicycle could go before it became uncontrollable. He asked his friend, who owned an old Mustang, if he could tie his bike to the bumper of his car to test his theory. His friend said, “Sure.”

With that, off they went. Things were going pretty well, with the car driver slowly speeding up to well over 60 mph. The young fellow on the bike was handling the speed just fine.

But all of sudden, a black Corvette came up beside them and the fellow driving the Mustang forgot about the fellow on the bike and took to drag racing the Corvette.

A little further down the road sat Officer John in his police cruiser, with his radar g*n at the ready. He heard the two cars before his radar flashed 105 mph.

He called the headquarters on his radio: “Hey, you guys aren’t going to believe this, but there’s a Corvette and a Mustang racing out here on Highway 3, and there’s a guy on a bike ringing his bell and waving his arms trying to pass them!” 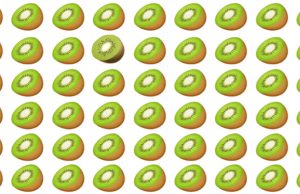 Only The Sharpest Eyes Can Spot The Odd One Out Within...