Two salesmen were going door to door, and knocked on the door of a woman who was not happy to see them.

She told them in certain terms that she did not want to hear their offer and slammed the door in their faces.

To her surprise, however, the door did not close and, in fact, bounced back open.

She tried again, really put her back into it, and slammed the door again with the same result — the door bounced back open.

Convinced, these rude people were sticking their foot in the door, she reared back to give it a slam that would teach them a lesson, when one of them said:

“Ma’am, before you do that again, you need to move your cat.” 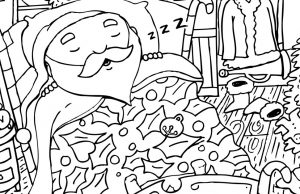 Can You Find a Star in This Sleepy Santa Hidden Picture?