An old cowboy walks into a barbershop in Montana for a shave and a haircut.

He asked the barber: “Please take a good look at my face, you would see that I have hollow cheeks.”

He replied: “Yes, I can see from this far, that they are quite prominent.”

The old man: “No matter how hard I try, I never get a close shave. The bristle in my hollow cheeks always gave me a feeling that it was an incomplete shave.”

Barber replied: “Don’t worry, sir, I’ll give you the cleanest shave you’ve ever had.”

The old man sat down in a chair.

The barber after lathering his face gave him a small wooden ball and told him to put it in his mouth.

When Barber was shaving his right side of the face, he told him to move the ball towards his right cheek.

He continued to shave, after some time he said now moved the ball towards his left cheek.

The whole process continued until the shaving was completed.

Barber moved his hand all over the face of the old man, he seemed quite happy and satisfied, and told him, he could take out the ball from his mouth.

The old man to check his shave, moved his hand all over his face and expressed satisfaction.

He returned the wooden ball to the barber and gave him a generous tip.

As the old man was leaving, he casually inquired: “I’m just curious if someone accidentally swallowed the ball, what would you do?”

He responded with a subtle smile: “Sir, don’t worry, such things do happen quite often, but they return the ball the next day. The ball that you have used today, was returned to me last evening.”

A Texas Cowboy Walks Into a Bar A cowboy who has just moved from Texas to Montana walks into a bar and orders three mugs of Bud.

He sits at the back of the room, drinking a sip out of each one in turn.

When he finishes them, he comes back to the bar and orders three more.

The bartender walks up and says to the cowboy, “You know, a mug goes flat after I draw it.

It would taste better if you bought them one at a time. ”

The cowboy replies, “You see, I have two brothers.

One is in Arizona and the other is in Colorado.

When we all left our home in Texas, we promised that we’d drink this way to remember the days when we drank together.

So I’m drinking one beer for each of my brothers and one for myself.”

The bartender admits that this is a nice custom, and leaves it there.

The cowboy becomes a regular in the bar, and always drinks the same way.

He orders three mugs and drinks them in turn.

One day, he comes in and orders only two mugs.

All the regulars take notice and fall silent.

When he comes back to the bar for the second round, the bartender says, “I don’t want to intrude on your grief, but I wanted to offer my condolences on your loss.”

The cowboy looks quite confused for a moment, then a light dawns in his eyes and he laughs.

“It’s just that my wife and I joined the Baptist Church and I had to quit drinking.”

“It hasn’t affected my brothers though.” 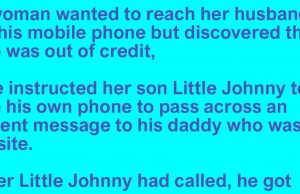 Only Genius Can Pass A Basic Road Signs Test. Can you...