Wake Up Your Mind
Home Life A man walks into a bar and sees 2 steaks hanging from...
Share
Tweet 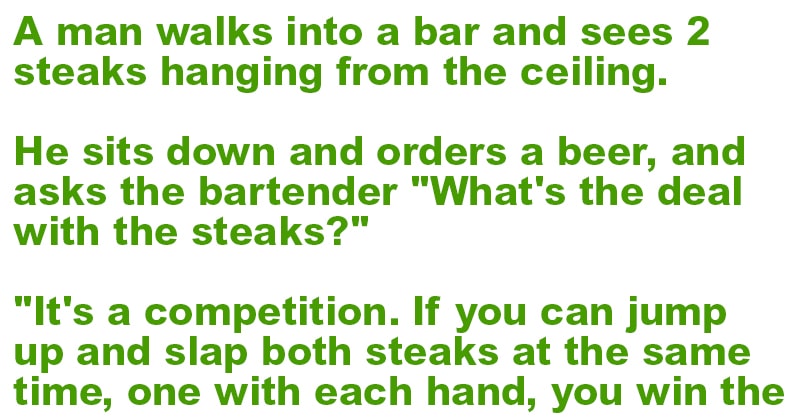 A man walks into a bar and sees two steaks hanging from the ceiling.

He sits down, orders a beer, and asks the bartender, “What’s the deal with the steaks?”

“It’s a competition. If you can jump up and slap both steaks at the same time, one with each hand, you win the bar. If you try and fail, you pay for everyone’s drinks for the rest of the night.”

The man sits down and thinks about it, and a few minutes later the bartender asks him if he would like to try.

“Nah, the steaks are too high.”

Another man heard the offer. He’d been having money troubles all his life but had slowly begun turning his life around.

He had saved money and paid off most of his debts. It had been a struggle though, and he wasn’t sure he could keep doing it much longer.

He thought if he could just win this bet, well, everything would be fine.

Of course, if he lost the bet, paying everyone’s bar tabs would be enough to financially ruin him.

“What the heck,” he thought.

He had played basketball in high school and considered himself to still be in good shape.

He crouched down and jumped as high as he could with all his might.

Her right hand stretched and stretched, and just with the barest of touches, his middle finger grazed the hanging meat.

In the same movement, his left hand turned to the steak. His reach came ever so close to the steak but alas no contact was made.

As the realization flooded over him, he crumpled to the ground and cried.

“How could I let one missed steak ruin my life?” 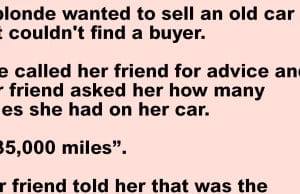 A Blonde Tried To Sell Her Old Car 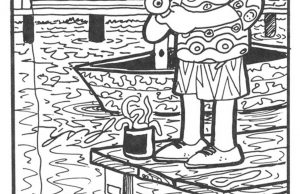