Stanley is looking for a new desk for his office

and he spots one that looks perfect in an antique shop window.

He goes inside and asks the shopkeeper how much it is.

“Ah,” says the shopkeeper, “but this is a magic desk.” He turns to the desk and asks, “Desk, how much money do I have in my pocket?”

The desk taps one of its legs on the floor four times. The shopkeeper turns out his pocket and, sure enough, there are four dollar coins there.

“Wow, that’s pretty cool,” says Stan. “Alright, desk, how much money does my wife have in her bank account?”

At this, the desk goes wild, manically banging all four of its legs up and down repeatedly for over five minutes non-stop.

“Darn, where did she get all THAT from?” wonders Stanley.

The desk’s legs slide apart and its drawers drop down. 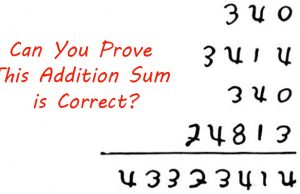 Can You Prove This Addition Sum is Correct?