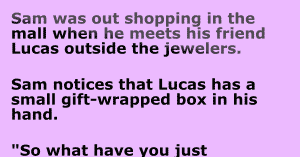 Sam was out shopping in the mall when he meets his friend Lucas outside the jewelers.

Sam notices that Lucas has a small gift-wrapped box in his hand.

“So what have you just purchased Lucas,” Sam asks?

“Well, now that you’ve asked,” replies Abe, “it’s my Sharon’s birthday tomorrow and when I asked her this morning what she wanted for her birthday she said, ‘Oh, I don’t know, dear, just give me something with a lot of diamonds in it'”.

Lucas replies, smiling, “I bought her a deck of cards”. 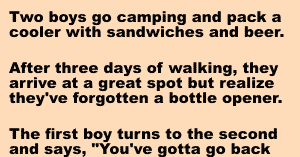 Two boys go camping and pack a cooler with sandwiches and beer. After three days of walking, they arrive at a great spot but realize they’ve forgotten a bottle opener.

The first boy turns to the second and says, “You’ve gotta go back and get the opener or else we have no beer.”

“No way,” says the second. “By the time I get back, you will have eaten all the food.”

Nine full days pass and there’s still no sign of the second boy. Exasperated and starving, the first Newfie digs into the sandwiches.

Suddenly, the second boy pops out from behind a rock and yells, “I knew it! I’m not freaking going!” Are You Able To Find The Cat Hiding In This Picture?