The wife has just taken a shower and comes out wrapped in a towel, still shy being newly wed.

“Well, I’ve seen you naked. You don’t need that towel,” says the husband.

“I just feel more comfortable this way,” the wife responds.

“But I want to take a picture of you in a natural state,” continues the husband.

The wife gets suspicious and asks what the husband would do with the photo.

“I’ll put in in my wallet and keep it close to my heart all the time,” he responds, and gets his picture, then heads for the shower himself.

He returns clean but also wrapped in a towel.

“Why are you wearing that towel now – I want a photo of you in return,” demands the wife.

The husband does as he’s told, the photo’s taken and they check the result in their digital camera.

“What will you do with this photo of me, then?” asks the husband.

The wife takes a good look at her husband, then the photo, then husband again.

“I’ll have it ENLARGED.”

READ
A Man With Six Kids Boarding In A Plane. 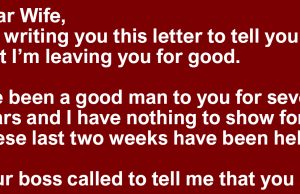 97% Of Adults Can’t Pass This Elementary Visual Test, Can You?