John came into the office an hour late for the third time in one week and found the boss waiting for him: “What’s the story this time, John?”

He asked sarcastically. “Let’s hear a good excuse for a change.”

“Everything went wrong this morning, Boss. The wife decided to drive me to the station. She got ready in ten minutes, but then the drawbridge got stuck. Rather than let you down, I swam across the river, look, my suit’s still damp, I ran out to the airport, got a ride on Mr. Thompson’s helicopter, landed at Battersea Heliport and a couple of wrestlers gave me a piggyback into work.”

“You’ll have to do better than that, John.” Said the boss, obviously disappointed…

“No woman can get ready in ten minutes.”

Looking for a Wife One day a friend asked, “Why aren’t you married? Can’t you find a woman who will be a good wife?”

Joe replied, “I actually found a lot of women that I wanted to marry, but when I bring them home to meet my parents, my mom doesn’t like them.”

His friend thinks for a moment and says, “I have the perfect solution, just find a girl who’s just like your mother.”

They meet again a few months later and his friend says, “Did you find the perfect girl? Did your mother like her?”

With a frown on his face, Joe replies, “Yes, I found the perfect girl. She was just like my mother. You were right, my mother loved her very much. ”

The friend said, “So what’s the problem?” There Is A Baby Hidden In This Photo — Can You... 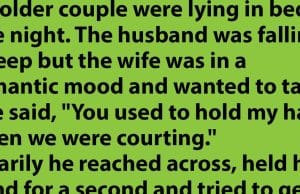