The farmer who lived nearby heard the noise.

“Forget your troubles. Come in and have dinner with us. Then I’ll help you get the wagon back up.”

“That’s so nice of you,” Willis replied, “but I don’t think Dad would like me to.”

“Nonsense, come on!” The farmer insisted.

“Well, okay,” the boy finally agreed, “but Daddy won’t like it.”

After a hearty dinner, Willis thanked his host. “I feel a lot better now, but I know Dad is going to be real upset.”

“Don’t be foolish!” the neighbor said with a smile. “By the way, where is your Pa?”

“Under the wagon,” Willis answered.

A Young Farmer Walks Into a Bar 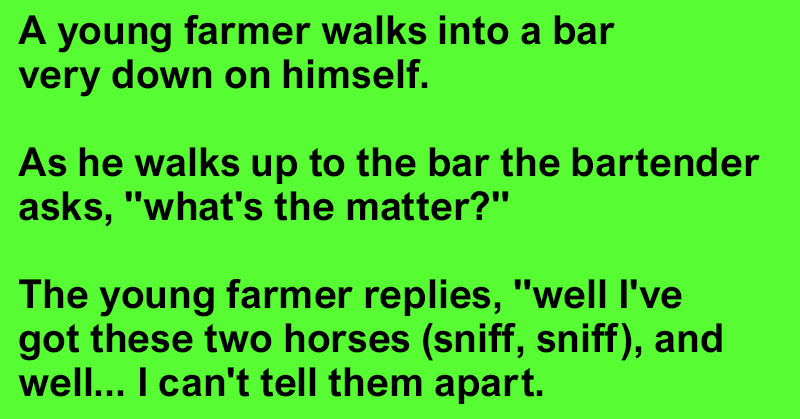 A young farmer walks into a bar very down on himself.

As he walks to the bar, the bartender asks, “what’s the matter?”

The young farmer replies, “Well I have these two horses (sniff, sniff), and hey… I can’t tell them apart. I don’t know if I’m mixing up riding times or even feeding them the right foods.”

The bartender, feeling sorry for the guy, tries to think of something he can do.

“Why don’t you try shaving the tail of one of the horses?”

The man stops crying and says, “That sounds like a good idea, I think I’ll try.”

A few months later, he returns to the bar in a worse state than before.

The young farmer, in no condition to be in public, replies, “I shaved the tail of one of the horses (sob, sob), but it grew back and I can’t tell them apart again!”

The bartender, who now just wants him to shut up or go, says, “Why don’t you try shaving the mane, maybe that will not grow back.”

The man stops crying, has a few drinks, and leaves.

A few months later, the man is back at the bar.

The bartender has never seen anyone in this sorry of a state.

Without the bartender even asking, the young farmer bursts into his problems. “I … I shaved the (sob) mane of one of the (sniff) horses, and… it… it… grew back!”

The bartender, now furious at the guy’s general stupidity, yells, “for crying out loud, just measure the stupid horses. Perhaps one is slightly taller than the other one!”

The man can’t believe what the bartender said and storms out of the bar.

The next day he comes running back into the bar as if he had just won the lottery.

“It worked, it worked!” he exclaims.

“I measured the horses and the black one is two inches taller than the white one!” 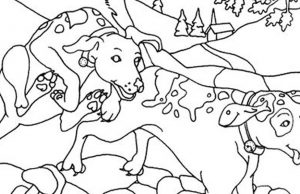