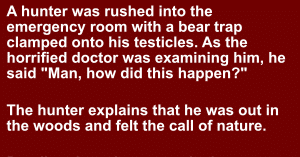 A hunter was rushed into the emergency room with a bear trap clamped onto his testicles. As the horrified doctor was examining him, he said “Man, how did this happen?”

The hunter explains that he was out in the woods and felt the call of nature.

Bending down by a tree, the bear trap was triggered and snapped shut on his testicles. “Oh,” exclaims the doctor,

“The pain must have been excruciating!” “It was,” said the hunter.

“Second worst pain in my life.” “SECOND worst? What could have been worse than that?”

“Coming to the end of the chain,” said the hunter.

A Call to the Librarian

A librarian is woken up in the middle of the night by a phone call.
“What time does the library open?” the man on the phone asked.
Annoyed, the librarian composed himself before he answered.

“9 am,” he said. “And what’s the idea of calling me at home in the middle of the night to ask a question like that?”

“Not until 9 am?” the man asked in a disappointed voice.
The librarian began to get angry. 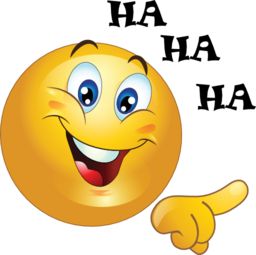 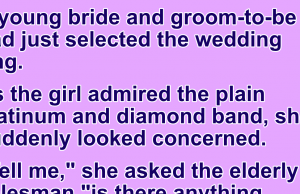 A young bride and groom-to-be had just selected the wedding ring.