A woman was at work when she received a phone call that her daughter was very sick with a fever. She left her work and stopped by the pharmacy to get some medication for her daughter.

The baby sitter told her that her daughter was getting worse. She said, “You might find a coat hanger and use that to open the door.” 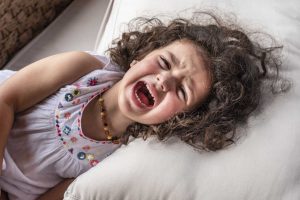 The woman looked around and found an old rusty hanger that could have been thrown to the ground by someone else who would have locked the keys in his car.

Then she looked at the hanger and said, “I don’t know how to use this.” So she bowed her head and asked God to send her some help. Within five minutes an old rusty car pulled up, with a dirty, greasy, bearded man who was wearing an old biker skull rag on his head. The woman thought, “Great God. This is what you sent to help me????”

But, she was desperate, so she was also very thankful. The man got out of his car and asked her if he could help. She said “Yes, my daughter is very sick. I stopped to get her some medication and I locked my keys in my car, I must get home to her.

Please, can you use this hanger to unlock my car?”

He said, “SURE.” He walked over to the car, and in less than one minute the car was opened. She hugged the man and through her tears, she said,” THANK YOU SO MUCH….. You are a very nice man.”

The man replied, “Lady, I am not a nice man. I just got out of prison today. I was in prison for car theft and have only been out for about an hour.”

The woman hugged the man again and with sobbing tears cried out loud….. “THANK YOU, GOD, FOR SENDING ME A PROFESSIONAL!” 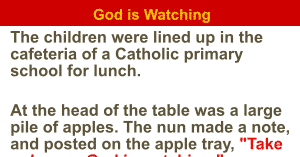 The children were lined up in the cafeteria of a Catholic primary school for lunch.

At the head of the table was a large pile of apples. The nun made a note, and posted on the apple tray, “Take only one. God is watching.”

Moving further along the lunch line, at the other end of the table was a large pile of chocolate chip cookies.

One child whispered to another, “Hey, we can take all we want. God is watching the apples.”

Have fun with us everyday <3

Can you solve this middle school math problem – without a...

“Week” Riddle – Riddle of the Week.

A 71-year-old man is having a drink in a Chicago bar.

How Fast Can You Find The Odd One Monkey In This...