The Genie and the 2 Wishes

A man goes for a leisurely stroll on the beach when he suddenly trips on something and falls. 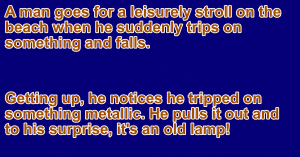 Getting up, he notices he tripped on something metallic. He pulls it out and to his surprise, it’s an old lamp!

He starts to brush it, thinking it might bring a few coins at the market when suddenly a great rush of blue smoke comes pouring out of the lamp and becomes a 7 feet tall genie!

The genie thunders: “You have awakened me, Oh Master! You can ask two wishes of mine, and I will make them come true.”

After a moment of shock, the man settles to think.

“I heard that it is usually THREE wishes!”
“Look in your pants.” said the genie.

The man looks inside his pants and gives a shriek. “My God, I’m… I’m ENORMOUS!”

“Not my first time.” Said the genie. 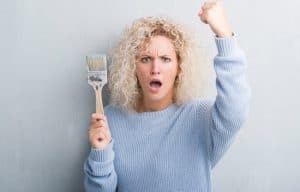 A blonde praying for stopping all blonde jokes

A boyfriend asks his girlfriend about Valentine’s Day’s gift