The florist sent flower to the wrong address

A new business was opening and one of the owner’s friends wanted to send him flowers for the occasion. They arrived at the new business site and the owner read the card, which said: “Rest in Peace.”

The owner was angry and called the florist to complain. After he had told the florist of the obvious mistake and how angry he was, the florist replied:

“Sir, I’m really sorry for the mistake, but rather than getting angry, you should imagine this – somewhere, there is a funeral taking place today, and they have flowers with a note saying:
“Congratulations on your new location!”

A Blond man is hired to paint the lines on the road.
On the first day, he paints ten miles, and his employers are amazed.

But, the second day he painted just five, and on only the third day, he painted only a mile of the road.

Disappointed, his boss asks what the problem was.

The Blond replies, “Well sir, every day I have to walk farther and farther to get back to the paint bucket.”

Blonde on a Galloping Steed. 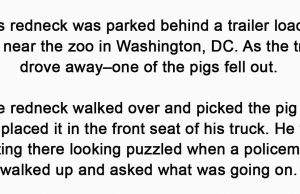 A Police Officer And A Redneck.

Man and an Ostrich

Challenge of the day: How many T’s can you find in...