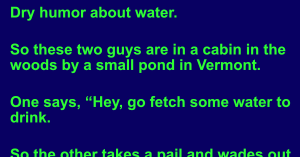 So these two guys are in a cabin in the woods by a small pond in Vermont.

One says, “Hey, go fetch some water to drink.

So the other takes a pail and wades out into the pond to get water. He looks up and there is a bear across the pond looking at him and growling!

The guy drops the pail and runs back to the cabin.

He bursts into the cabin and shouts, “There’s a bear in the lake!”
The other guy looks up and says, “Relax, he’s probably more scared than you are.”

The somewhat wet guy says, “Oh, then you wouldn’t want to drink the water anyway.” Can You Find The Odd One Out In All 8 Levels... A Young Lady At The Airport.