After four years of separation, a man and his wife finally divorced amicably.

He wanted to date again, but he had no idea of how to start, so he decided to look in the personals column of the local newspaper.

After reading through all the listings, he circled three that seemed possible in terms of age and interest, but he put off calling them.

Two days later, there was a message on his answering machine from his ex-wife:

“I came over to your house to borrow some tools today and saw the ads you circled in the paper. Don’t call the one in the second column. It’s me.”

After being with her all evening, the man couldn’t take another minute with his blind date.

Earlier, he had secretly arranged to have a friend call him on the phone so he would have an excuse to leave if something like this happened.

When he returned to the table, he lowered his eyes, put on a grim expression and said:

“I have some bad news. My grandfather just died.”

“If yours hadn’t, mine would have had to!”

A young man showed up to his date’s house and told her they were going to have “an awesome time” that evening.

“What are we doing?” she asked.

“I got three tickets to a concert.”

“Why would we need three tickets?” his date asked.

“The tickets are for your parents and sister.”

A boy was feeling very nervous about his first date, and so went to his father for advice.

“My son, there are three subjects that always work with women: food, family, and philosophy.”

The boy picks up his date, and they stare at each other for a long time. The boy’s nervousness builds, but he then remembers his father’s advice and asks the girl:

“No,” comes the answer, and the silence returns like a suffocating blanket.

“Do you have a brother?”

After giving it some thought, the boy plays his last card:

“If you had a brother, would he like potato pancakes?” Woman Calls Her Husband After Losing Her Keys. 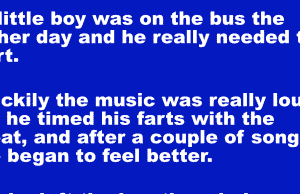 A Little Boy was on the bus