READ
Find a Sledge Hidden in This Picture.

The local sheriff was looking for a deputy, so Chad – the new blond recruit, wants the job.

The sheriff thought to himself, “That’s not what I meant, but he’s right.”

“What two days of the week start with the letter ‘T’?”

He was again surprised that Chad supplied a correct answer that he had never thought of himself. Perhaps he has a creative mind.

Chad looked a little surprised himself, then thought really hard for a minute and finally admitted, “I don’t know.”

“Well, why don’t you go home and work on that one for a while?”

So, Chad wandered over to the pool hall where his pals were waiting to hear the results of the interview.

“It went great! First day on the job and I’m already working on a murd*r case!”

Can You Find The Missing Number In Less Than 10 Seconds?... 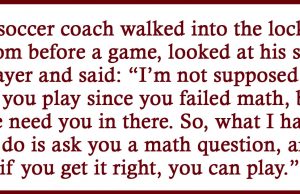