were putting a new roof on a barn when a bundle of shingles slid down the slope and knocked the ladder over.

Bob and Dan decided since it was early they would continue working because someone would surely come around by quitting time.

It was nearing 5 PM and they hadn’t seen hide nor hair of anyone.

So, they walked around the roof a few times and finally decided there was only one way down.

On the West side of the barn was a big manure pile.

Bob says, “It’s the only way down. I will go first.” Bob jumped.

Dan heard the squishy landing and yelled, “Hey Bob! How deep did you go?”

Bob yells back, “I went to my ankles Dan, come on JUMP!”

Dan jumps… and sinks clear up to his neck in manure! “I thought when you jumped you went up to your ankles?” He shouts at his friend.

“I did…” Explained Bob, “but I landed head first!”

A reporter hears of a woman in his town that has the highest welfare payments, and he was curious as to why.

So he went to her house to interview her.

He got to a little house and after she opens, introduces himself and asks her, “How old are you?” He asked.

“And how many children do you have?”

“And what are their names?” he asked.

“They’re ALL named Bob?” he asked, even more bewildered. “What if you want them to come in from playing outside?”

“Oh, that’s easy,” she explained, “I just call ‘Bob,’ and they all come running inside.”

“And if you want them to come to the table for dinner?”

“But what if you want just ONE of them to do something?” he asked. 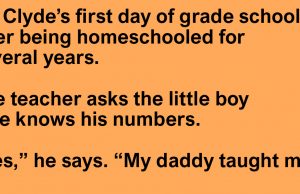 Teacher Asks The Little Boy If He Knows His Numbers