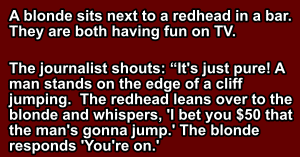 A blonde sits next to a redhead in a bar. They are both having fun on TV.

The journalist shouts: “It’s just pure! A man stands on the edge of a cliff jumping.  The redhead leans over to the blonde and whispers, ‘I bet you $50 that the man’s gonna jump.’ The blonde responds ‘You’re on.’

So, both of the women stare at the news waiting to find out what happens next.

The blonde turns to the redhead and gives her the $ 50. The redhead, feeling guilty, said, “I can’t take the money”

I saw the news earlier this morning. I knew he was going to jump off the cliff.’ The blonde says, ‘Well, I saw too. But I never would have thought that he’d do it again.’

A blind man wants to tell joke about blondes 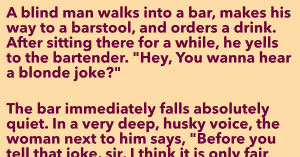 Keeping It All Inside.