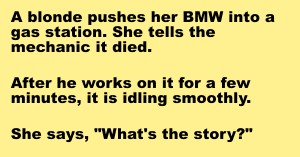 A blonde pushes her BMW into a gas station. She tells the mechanic it died.

After he works on it for a few minutes, it is idling smoothly.

He replies, “Just crap in the carburetor”

A horse walks up to the bartender

A horse walks into a bar.

He goes to the bartender and says “Give me a beer.”

The bartender is stunned.

He heads to the back of the bar to speak to his boss.

The bar owner pauses for a second, then replies “Well then give him one, but charge him double. Horses don’t know the price of beer.”

So the bartender heads back out front and hands the horse a beer.

“You know,” says the barkeep, “we don’t get many horses around here.”

To which the horse replies, “At these prices, I’m not surprised.”

To my Brother in Heaven

Most adults get it wrong: Are you clever enough to pass...