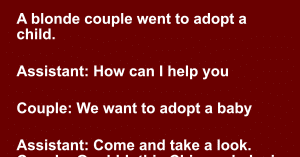 Assistant: How can I help you

Couple: We want to adopt a baby

Assistant: Come and take a look. Couple: Ooohhh this Chinese baby is cute but will come to get it later

Assistant: why not now?

Couple: First we’ll have to learn how to speak Chinese.

A blind man wants to tell a joke about blondes Picture Puzzles: Can You Spot The Odd One Out In Less... Teacher asked students to use the word beautiful in the same...