One night there were three female fugitives escaping from jail.

One was blonde, one was brunette and the other was a redhead.

They had the police hot on their trail and, quickly thinking the brunette points out an old, abandoned factory perfect for hiding in.

When all three were inside the redhead, quickly thinking said they should all hide in old potato sacks in the corner as they could hear the police approaching the factory.

They all got in their little potato sacks and barely a minute later the police came crashing through the door.

They looked at the sacks and said: ‘Hmm maybe they are hiding in these.’

The officer kicks the red-head’s sack and she makes whimpering noises. ‘Hmm just puppies in that sack’

The officer kicks the brunette’s sack and she makes mewing noises. ‘Hmm just kittens in that sack’ He says.

He finally kicks the blonde’s sack and she screams: ‘POTATOES! POTATOES!’ 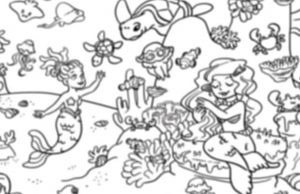 Two blondes drive through the middle of Kansas