An Austrian, an Indian, and a Russian got in Hell

and plead to the Devil that they don’t belong here. The Devil, bored, makes them an offer: “I’ll strike you three times with my whip, and if you survive, I’ll let you go. You can use anything you want as a shield.”

Next goes the Indian. He puts himself in some advanced Yoga position and goes into deep hibernation. The Devil strikes once – nothing; twice – the Indian shivers a bit; thrice – the Indian grunts, but lives. The Devil is amazed and tells him he’s free to go. The Indian asks, “May I stay and watch? In all jokes the Russians somehow come out on top. I wanna see how he will do it this time.”

The Devil nods and turns to the Russian: “So, what will you use as a shield?”

The Russian: “The Indian, of course.”

There was this Christian lady that had to do a lot of traveling for her business so she did a lot of flying.

But flying made her nervous so she always took her Bible along with her to read and it helped relax her.

One time she was sitting next to a man. When he saw her pull out her Bible he gave a little chuckle and went back to what he was doing.

After a while, he turned to her and asked: “You don’t really believe all that stuff in there do you?”

The lady replied “Of course I do. It is the Bible.”

He said “Well what about that guy that was swallowed by that whale?”

She replied “Oh, Jonah. Yes, I believe that, it is in the Bible.”

He asked, “Well, how do you suppose he survived all that time inside the whale?”

The lady said “Well I don’t really know. I guess when I get to heaven I will ask him.”

“What if he isn’t in heaven?” the man asked sarcastically.

“Then YOU can ask him.” replied the lady. 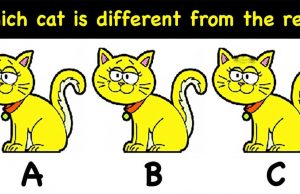 Very few people can do it: Can you spot which cat...

A woman dreamed of being given a pearl necklace for Valentine’s...