One day, there was this lawyer who had just bought a new car,

and he was eager to show it off to his colleagues, when all of a sudden, an eighteen wheeler came out of nowhere and took off the driver’s side door with him standing right there.

Because he knew that no matter how much a mechanic tried to fix it, it never would be the same.

Finally, a policeman came by, and the lawyer ran up to him yelling.

“MY BMW’S DOOR WAS JUST RUINED BY SOME FOOLISH DRIVER!” he exclaimed.

“You’re a lawyer aren’t you?” asked the policeman.

“Yes, I am. But what does this have to do with my car?” the lawyer asked.

“HA!” the policeman replied. “You lawyers are always so materialistic. All you care about are your possessions. I bet you didn’t even notice that your left arm is missing did you?” the cop said.

The lawyer looked down at his side and exclaimed: “MY ROLEX!!”

In a trial, a Southern small-town prosecuting attorney called his first witness, a grandmotherly, elderly woman to the stand.

He approached her and asked: “Mrs. Jones, do you know me?”

She responded: “Why, yes, I do know you, Mr. Williams. I’ve known you since you were a boy, and frankly, you’ve been a big disappointment to me. You lie, you cheat on your wife, and you manipulate people and talk about them behind their backs. You think you’re a big shot when you haven’t the brains to realize you’ll never amount to anything more than a two-bit paper pusher. Yes, I know you.”

The lawyer was stunned. Not knowing what else to do, he pointed across the room and asked: “Mrs. Jones, do you know the defense attorney?”

She again replied: “Why yes, I do. I’ve known Mr. Bradley since he was a youngster, too. He’s lazy, bigoted, and he has a drinking problem. He can’t build a normal relationship with anyone, and his law practice is one of the worst in the entire state. Not to mention he cheated on his wife with three different women. One of them was your wife. Yes, I know him”.

The judge asked both counselors to approach the bench, and, in a very quiet voice, said:

“If either of you idiots asks her if she knows me, I’ll send you both to the electric chair.” 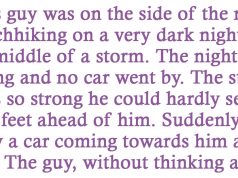 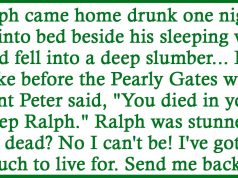 Ralph and His Afterlife. 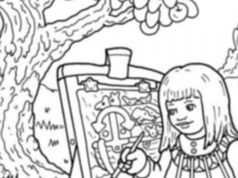 Where is The Hidden A?

Can You Figure Out What Number Comes Next? There Are Two...

A lady went to the bar on a cruise ship

How Many Full Circles Can You Count?