Three little lads were on their way home from school when one of them noticed a red Ferrari parked at the side of the road.

He said: “When I’m older I’m going to get a great job and buy one of them.” 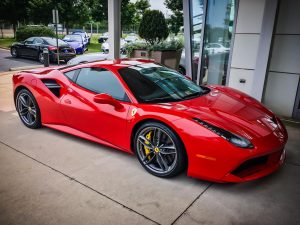 The second lad said: “I am going to university to get a great education, and a great job and buy one also.”

The third lad says: “I’m going to get a job like my sister.”

The other two asked what she did. “She’s a pr…os.ti….tu…te

Two Blondes and a Car

Two blondes were walking out of a restaurant when they discovered with their horror that they locked their keys in their car.

The one blonde says to the other, “What do we do? Do we get a coat hanger and pick the lock?”

The other one replied, “No, people will think we are trying to break in.”

The other one said, “Well, do we get a knife and cut the rubber and pop the lock?”

The other one replied, “No, people will think we are too stupid to use the coat hanger.”

The other one said, “Well, we better think of something quickly because it’s starting to rain and the sunroof is open.”

A Man Buying A Centipede

Blonde is standing in front of the soda machine

A Blonde Buy a New Car

Find An Odd Image! Can You Spot A Difference In One...