The bartender is concerned to hear this and tells the man,

“I’m sorry but I can’t help you k i ll yourself. I wouldn’t be able to live with myself.”

The man asks him, “Well what would you do in my situation?”

The bartender thinks for a moment and says, “Honestly, if I found out a guy was sleeping with my wife I wouldn’t sit around feeling sorry for myself or drinking myself to death, I’d k i ll the guy.”

The man leaps from his stool and shouts, “Hey, that’s a great idea! Thanks!” and runs out of the bar leaving the shocked bartender behind.

A couple hours later the man walks back into the bar with a smile on his face.

The bartender is nervous now. He’s afraid to ask but eventually says, “Did you k i ll the guy?”

The man says, “No, I slept with your wife! Whiskey please.” 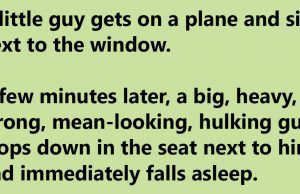 A Little Guy on a Plane. 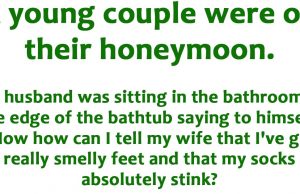 A Young Couple On Their Honeymoon Decides To Confess Their Secret.

Are You Sharp Enough To Find The Car?