Tom applies for a job as a signalman on the local railroad and is told to meet the inspector at the signal box.

The inspector decides to give Tom a pop quiz and asks, “What would you do if you found that two trains were heading towards each other on the same track?”

Tom says, “I would switch one train to another track.”

“What if the lever broke?” asks the inspector.

“Then I would run down to the tracks and use the manual lever down there,” Tom replies.

“What if that had been struck by lightning?” challenges the inspector.

“Then,” Tom continued, “I would run back up here and use the phone to call the next signal box.”

“What if the phone is busy?”

“In that case,” Tom argued, “I would run down the street and use the public phone near the station.”

“What if that had been vandalized?”

“Well,” Tom said, “in that case, I would run into town and get my Uncle Leo.

This confused the inspector and he asked, “Why would you do that?”

Johnny Looking For A New Job Little Johnny walks into a general store, goes to the owner, and asks for a new job.

The owner says, “Do you think you are a good salesman?”

Little Johnny says, “I don’t know. I think so.”

The owner says, “I’ll tell you what. The next customer comes in, you watch me. If you think you can do what I’m doing, you’ve got a new job!”

A customer comes in a few minutes later.

The customer says, “Yes. I want to buy a bag of grass seed.”

“No problem,” Says the owner looking for a bag of grass seed. “Do you think you might want a lawnmower with that?”

“Yes,” Says the owner. “If you plant that grass seed, you’re gonna have a lot of grass to cut. You may also want to buy a lawnmower too.”

The customer thinks it’s a great idea and accepts.

The owner sells him the grass seeds and the lawnmower, and the customer leaves.

The owner turns to Little Johnny and says, “See that? That’s selling! The guy wanted some grass seeds and I sold him a lawnmower too! Do you think you can do that?”

Little Johnny says, “Yeah, he can do that.”

So the owner says, “Great. The next customer who comes in is yours. I will just stand here quietly and watch. We will see how you do. ”

A few minutes pass by and another customer enters.

Little Johnny says, “Can I help you?”

The customer says, “Yes. I want to buy a box of Tampax for my wife.”

“No problem,” says Little Johnny as he reaches for the box of Tampax.

“Do you think you might want a lawnmower with that?”

“You’re not going to be doing anything else for the next 7 days, you might as well cut the grass!” 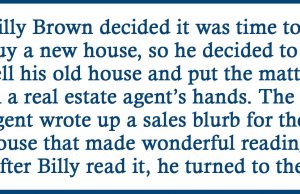 Billy Looking For a New House. Eye Test: Can You Spot The Odd Out In Less Than...