A woman in a supermarket is following a grandfather and his badly-behaved grandson.

He has his hands full with the child screaming for sweets, snacks, all sorts of things.

The grandad is saying in a controlled voice:“Easy, William, we won’t be long… easy boy.”

Another outburst and she hears the grandad calmly say “It’s okay William. Just a couple more minutes and we’ll be out of here. Hang in there, boy.”

At the checkout the little horror is throwing items out of the cart. Grandad says again in a controlled voice :“William, William, relax buddy, don’t get upset. We’ll be home in five minutes, stay cool William.”

Very impressed, she goes outside to where the grandfather is loading his groceries and the boy into the car.

She says : “It’s none of my business, but you were amazing in there. I don’t know how you did it. That whole time you kept your composure, and no matter how loud and disruptive he got, you just calmly kept saying things would be okay. William is very lucky to have you as his grandad.”

“Thanks,” says the grandpa. “But I am William. The little bugger’s name is Kevin!”

READ  A Blonde at the Doctor's

How Many Colors Are Named?

You Have 30s To Find All The Odd Animals In These...

Most people are failing this test – but how many B’s... 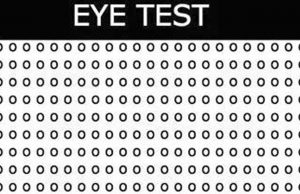 Can You Find The C In This Puzzle?

Most people will fail this test – but how many triangles...