NASA was interviewing professionals to send to Mars. Only one could go and couldn’t return to Earth.

The first applicant, an engineer, was asked how much he wanted to be paid for going. “A million dollars,” he replied, “because I want to donate it to M.I.T.”

The next applicant, a doctor, was asked the same question. He asked for $2 million. “I want to give a million to my family,” he said, “and leave the other million for the advancement of medical research.”

The last applicant was a lawyer. When asked how much money he wanted, he whispered in the interviewer’s ear, “Three million dollars”.

“Why so much more than the others?” asked the interviewer.

A Mathematician, a Physicist, and an Engineer A mathematician, a physicist, and an engineer were in a hotel for a conference.

Then, in the middle of the night, for no apparent reason, a fire breaks out in the engineer’s wastebasket.

The engineer rushes into the bathroom, empties out the ice bucket, fills it with water, and pours it into the trash can, dousing the fire.

Satisfied that the problem was solved, the engineer goes back to sleep.

Shortly after, a fire breaks out in the physicist’s wastebasket.

The physicist rushes into the bathroom, whips out his calculator, does some calculations, pulls out a cup, fills it to a precisely measured level, and rushes back to the wastebasket, pouring the water onto the fire.

READ
A lady went to the bar on a cruise ship

As the last drop hits the flame, the fire goes out.

Satisfied that the problem was solved, the physicist goes back to sleep.

Finally, a fire breaks out in the mathematician’s room.

The mathematician rushes to the bathroom, sees the ice bucket, sees a cup, sees the water faucet.

Satisfied that the problem could be solved, he goes back to sleep. 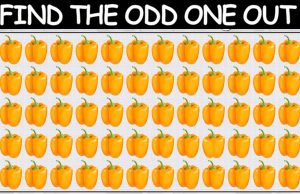 Is Your Vision Good Enough To Spot The Odd Ones Out?